The Welsh Kite Trust blog has now moved to the new website at www.welshkitetrust.wales. Please find us there.
Posted by Paddy J at 12:48 3 comments:

A twist in the tale: Red Kites are back in town

An interesting piece of research on urban kites!
See.

Tony Cross has ringed and tagged over 50 young kites in Shropshire and outlying areas from the core population in Mid Wales and a number of kestrel broods including some in the new boxes put up by the N Ceredigion section of the West Wales Wildlife Trust.
Posted by lizsnell at 17:06 21 comments: 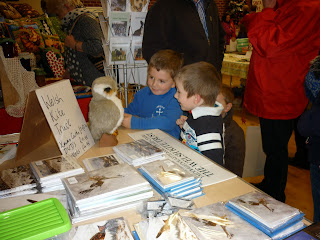 The Tregaron Xmas Fair was another opportunity to sell kite Trust Xmas cards and 'Stuffie' (see previous post) accompanied me for a marathon 2pm to 8pm session in the refurbished Memorial Hall**  but was utterly upstaged by a toy eagle owl whose head movements and vocalisations are triggered by a movement sensor.  Uncannily these movements appear to be random and this caught the attention of young and …no I couldn't take pictures!  If I had a pound for every hoot and turn of the head I wouldn't need to sell the cards, I could give them away!  This toy owl suffered abuse from those who failed to see how it worked so it got poked, prodded, stroked and tipped ace over base….and that was just the adults present!
Fortunately, before the Duracells gave up the ghost, the Tregaron Male Voice Choir  started up with a vigorous rendition of Christmas favourites and all trooped out to see the Christmas Tree light up.
I scarpered with my many purchases of local pork sausages ( well, sort of local, seeing as the pigs came from Hungary: a curious breed of curly haired porkers called Mangalitzers) and other goodies before the children returned who wanted to take home a feather from the ever patient 'stuffie' and my owl! 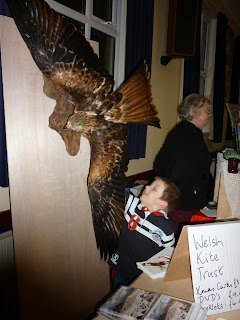 Not the usual flight path! 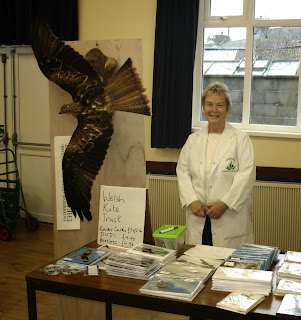 Jenny Tillotson,President of Tregaron WI, kindly allowed the Trust to sell some Xmas cards at the fortnightly WI market in the Memorial hall Tregaron and 'Stuffie' the flying kite came along to help out…well one lady refused to enter the Hall, averse to feathers!… but others couldn't resist stroking my visual aid.
We need to sell a lot more so have a look at the website and phone,post or e-mail your orders.  Superb designs, printed and produced in Wales at £3 for 6 cards unless you want the bargain pack of mixed designs at 7 cards for £3.
If however you are in striking distance of Tregaron the big Xmas Fair will be on Dec 6th where not only can you purchase our brilliant cards but also try to win a generous prize in the simple Bird Quiz and there will be a fabulous array of cakes,jams and pickles for which the WI is rightly famed plus lots of other crafty type things. 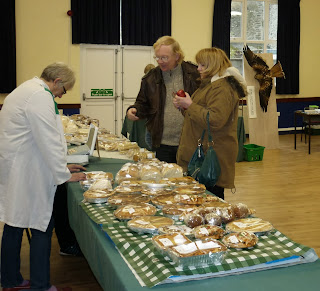 Tadcaster police and the RSPB are appealing for information after a Red Kite was poisoned in the area. The bird was found at Toulston Polo Ground, Tadcaster in October 2012, by a member of the public who contacted Yorkshire Red Kites, who in turn reported the suspected poisoning to North Yorkshire Police.
Following a post-mortem examination and forensic testing it was found to have died from the illegal poison Carbofuran, which was banned in 2001. The RSPB have offered a £1,000 reward for anyone who can provide information that leads to the arrest and charging of those responsible for the bird's death.
Between 2002 and 2011, there were 292 confirmed cases of birds of prey being killed by Carbofuran poisoning in England. PC Sarah Ward of Tadcaster Safer Neighbourhood Team said: "This crime is appalling. The use of Carbofuran is both unlawful and highly dangerous. It is highly toxic and a few granules could kill. Someone has put Carbofuran into the countryside unlawfully, risking the lives of people, domesticated animals and wildlife. I urge anyone with information to contact the police or RSPB immediately."
The Red Kite that died was hatched in Wales in 2009 and is believed to be one of a breeding pair that first bred at Tadcaster Grammar School in 2012. They are the first-known Welsh-born Red Kites to have bred in Yorkshire.

Red Kite, Harrogate, North Yorkshire (Photo: Rob Sewell)
Bob Elliot, RSPB Head of Investigations, said: "Since their successful release back into the Yorkshire countryside in 1999, Red Kites have suffered at the hands of illegal poisoning in North Yorkshire with this incident being the twentieth poisoned Kite since 2000." Mr Elliot added: "Birds of prey are still being targeted by those intent on killing our most protected species and it is simply not acceptable to still be finding poisoned, trapped and shot raptors in our countryside."
Doug Simpson, Yorkshire Red Kites Coordinator, said: "The loss of any bird through illegal poisoning is a big disappointment. It is particularly disappointing in this case, with this kite being of Welsh origin and the first from that source known to have bred in Yorkshire."
Anyone who can help to identify those responsible for this poisoning should contact Tadcaster police on 101, select option 2 and ask for Sarah Ward. You can also contact the RSPB on 0845 4663636 or Crimestoppers anonymously on 0800 555111.

Posted by lizsnell at 21:35 No comments:

The Kite Trust needs to sell quite a few Xmas Cards this Autumn!  If anyone out there lives in West Wales ideally within reach of Aberystwyth,Tregaron or Rhyader and would like to help us please contact me on 01974 299166 or e-mail the Trust via the website.  If you live somewhere else in Wales and have an outlet for selling cards we would most grateful if you would contact me on the above number or the WKT via the website.

We also have some OVERSTOCKS of C5 plain WHITE ENVELOPES.  If anyone has a use for these they are available at a very special price.  Phone me on 01974 299166