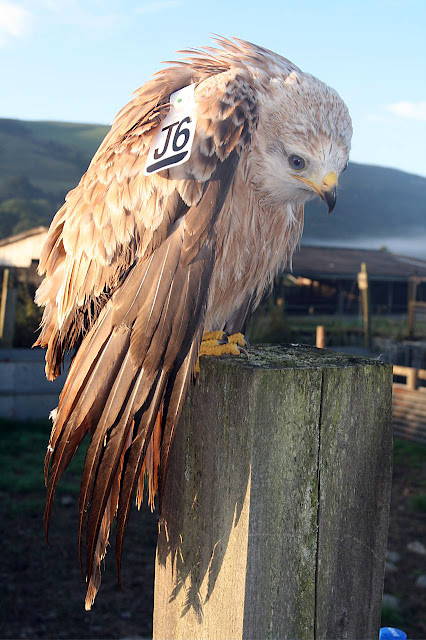 Just had an email and follow-up telephone conversation from Mick Todd a raptor re-habilitator in Lincolnshire who has just taken delivery of Black/White J6. This leucistic kite featured in the last but one post having been released at Gigrin Farm on 19th August. On Friday 9th September it turned up in Freestone near Boston, Lincolnshire (254 kms from where it was released).  It was found uninjured but exhausted and hungrily devouring a dead cat!  Plans are being made to get it back to Wales to be released at some future date.
Posted by Tony Cross at 11:21 No comments:

Can you count to four!

In 25 years of climbing to kite nests I've never had the opportunity to test that out on chicks before! It has finally happened! A nest near Llanidloes, monitored by Dee Doody, has become the first nest to my knowledge in Wales ever to rear four chicks - well I say rear! In what may seem a bit of a harsh act, the three youngest were collected on behalf of the Irish re-introduction scheme. I would have dearly loved to have left all four to fledge in Wales but we were having great difficulty finding nests with more than one! Anyway, most kite pairs in Wales only produce a single chick and if you are going to found a new population it is best to use the best genetic stock you can get! 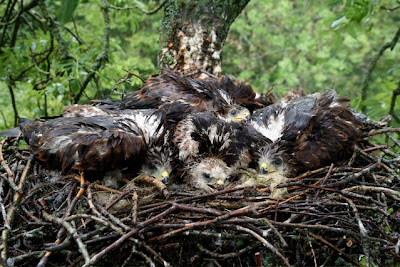 The wet kite mentioned in an earlier post by Liz made a speedy recovery and was released from Gigrin Farm on 19th August, along with its rather off-colour cell mate! The pale kite is the second youngster with such abnormal colouring we know to have been reared this year. The other was ringed as a chick in a nest near Llanddeusant. Both kites flew off very strongly, adding to the increasing numbers turning up at Gigrin now that the breeding season is over. 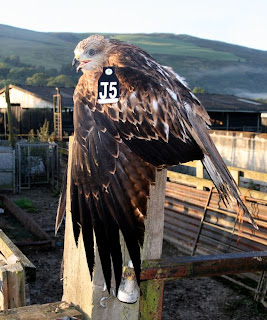 The wet kite posing on a fence post at Gigrin Farm, just prior to flying off. 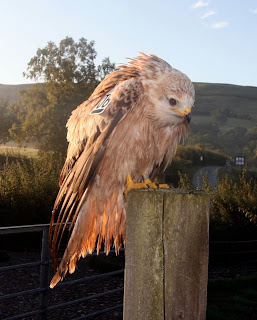