At the moment kite watchers are anxiously checking the nests for chicks.  Most are quite small being a late season and on my patch a couple of regularly successful pairs have failed at a late stage; annoyingly I have no idea why and unlike my blue tits there are no nestcams looking down on them.
Yesterday I gained permission to enter a local oakwood  and looking up through the sunlit leaves I could clearly see a large brown raptor hard at work: a shower of  black feathers indicated that a chick was going to be fed 'corvid tartare'. Unfortunately the bird in the kite nest had the wrong shaped tail and the nest was ringed with fresh oak leaves....my heart sank as I realised the aerial battle I'd seen in April had been won by the buzzard.
Just at that moment a familiar whistling flew in on my left and grew more persistent as I quickly legged it up the slope; yes, result!  A downy kite chick in a new nest not far away from buzz.  Dilemma: adult whistling itself hoarse and landowner in the farmyard not 200m away...will he be cross about the disturbance?  I didn't stop to scope it for a better look even though I really needed to check whether the other whitish blob in the nest was a dead 2nd chick or sheep's wool judging it better to make a quick and clearly seen exit for the benefit of both bird and farmer's feelings!
Some kites make a lot of noise during nest visits and some don't; the recorded evidence is that kites change nest locations after a failure to bring up a chick or having lost a partner or if the tree and/or immediate surroundings have altered or even, as in this case, another bird such as buzz or raven has taken over the nest.  Many nests where the chicks have been regularly  ringed and tagged have remained in use for years indicating that purposeful visits are tolerated; in this instance,however,I judged brevity was the best course of action.  15 mins from gate to wood and back to gate.
Posted by lizsnell at 09:22 No comments:

Gareth Jones, mammal expert and tag reader spotted a single tagged kite among a dozen or so hunting over  freshly cut silage : PURPLE on the LEFT wing ! White on the right. T6 was the code. My out of date kite tag guide says this is Aberdeen's colour code.
Will post further details when I can get them.
Silaging provides good opportunities for tag reading as they fly slow and low over the fields.  Gareth also reported the kites standing on the ground with wings partly spread as though sun-bathing.  This is I think fairly unusual...anyone out there with any experience of this?
Posted by lizsnell at 23:38 No comments: 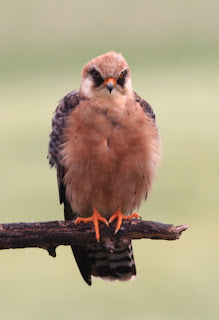 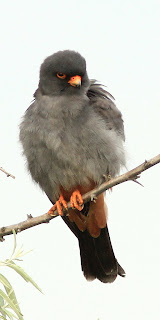 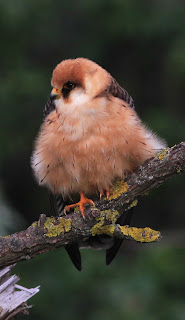 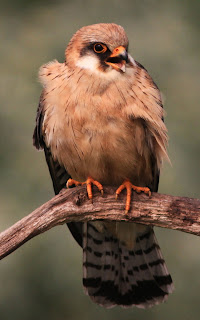 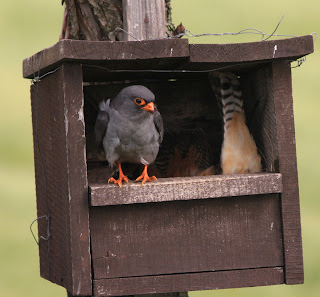 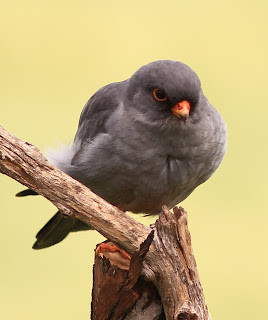 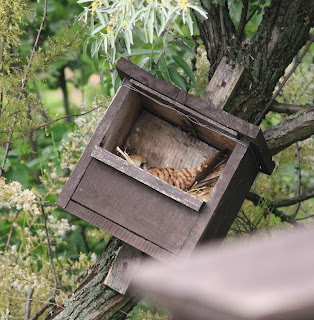 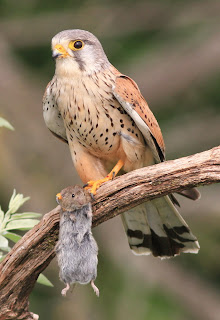 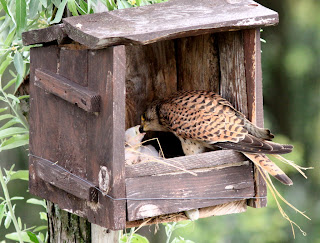 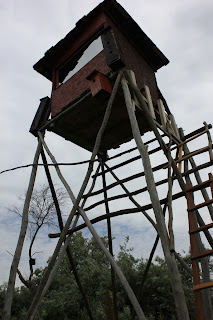 We have just returned from Hungary and these pics of a red footed falcon and kestrel colony are to show what is possible if you book a unique photo hide tour with Ecotours based in Hungary.  As raptor enthusiasts it was sheer joy to be party to 5 hours of life with these beautiful birds albeit starting at 5am.  The kestrel pics are especially to cheer up Paddy: there are hundreds of kestrels on the Puszta  just 2 hours from Budapest and for this experienced pair of birds no shortage of food, the chicks were fed 2 voles and a huge green lizard in quick succession and as you can see you don't even need to put up a straight box!
The light was poor (Hungary,unusually has endured a cold wet Spring) and the hide draughty but it was non-stop action from the birds which also included breeding Rollers,Golden orioles and Long eared owls!  We couldn't however take our eyes off the red foot female who is a real beauty, no wonder the males are so willing to share parental duties though both sitting in the box before an egg is laid is going a bit far!
Bri has just started photography so if you are an expert you can see the possibilities here and if you just like watching bird behaviour then this is a must.
The off-road drive to the hide was quite exciting plus climbing into the hide!  Elf and safety? I trusted in Istvan Bartol, warden of the Kiskunsagi Nemzeti National Park, he built it!  www.ecotourswildlife.co.uk

Posted by lizsnell at 18:07 No comments:

2 tags read on Monday in a valley near TalyBont: V5 white and 72 dark blue.
Posted by lizsnell at 18:10 No comments: