Sometimes they hit the ground

At Talsarn recently Susanna witnessed at close range a kite flying into the ground at feeding time and stunning itself. It hit breast first fortunately so after a rest it recovered enough to fly off strongly so nothing broken. Susanna said it was the first ever in 15 years to misjudge the slope of the field and no, it wasn't the one-eyed one!
Posted by lizsnell at 07:07 No comments: 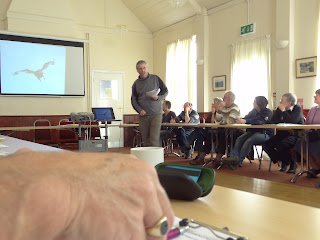 Tony reading his script to a rapt audience...no it was good really! Watchers met in the convivial surroundings of the Elan Valley Hotel and were kept up to date with the Trust and all its workings. Contributions from guest speakers included Steve Roberts on Honey Buzzards, always fascinating to hear plus this year he had a first class video courtesy of the BBC;those chicks are so attractive even when eating frogs' legs! Paddy Jenks also added some insights into Kestrel breeding and drew on new data from radio-tagging showing that kestrels don't even put the brakes on for improved pasture,flying straight on to any patch of tussocky grassland which unfortunately is still disappearing fast.
Other short talks were given by Leo Smith our expert in Shropshire reporting on the success of Welsh kites in England, and Chairman Mike Hayward keeping us abreast of the technicalities involved with DNA testing.
Fortunately the Welsh Kite Trust has the backing of a loyal membership and keen watchers so we can look forward to another year of caring for kites and increasingly,to monitoring other birds such as kestrels,barn owls and peregrines which are all struggling to survive intensive agriculture, rodenticides and declining prey species.
Posted by lizsnell at 06:32 No comments:

Blind in one eye but still flying White 6 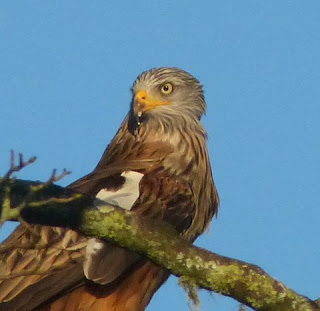 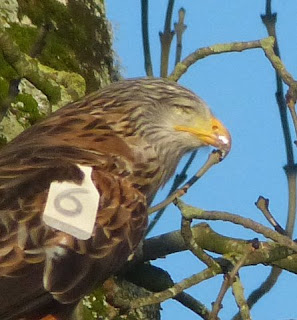 Start off with my best side! This bird has been a regular at Susanna's feeding station at Talsarn and although missing a wing feather or two seems to be holding its own against the other 200 plus kites that visit. What is its history Tony? Male or female?
Posted by lizsnell at 06:23 1 comment: