At 7.45am today there was a simultaneous 'eruption' of 25 kites from the occasional roost opposite my home near Aberhosan, Machynlleth. What a privilege to see this spectacle from my bed!
Posted by Elfyn Pugh at 08:40 No comments:

Get your kit organised kitewatchers!. My closest nest has activity there. The pair have been around for the last three days, and this a.m. I saw the male at his normal perching branch during the season, and wondered where the female was. Lo and behold she was on the nest, not only tidying up some twigs, but actually sitting. I checked again in an hour, and at this moment she is still sitting. Could be an early season?
Posted by Unknown at 13:10 No comments:

Meagre pickings at the kite count and where are all the tagged birds?

This weekend saw our second attempt at the Europe-wide co-ordinated winter census of Red Kites. Most other countries do their counts at communal roosts but since most of our birds roost in fairly small dispersed groups it is more realistic to have a co-ordinated count of all the main feeding stations. This time last winter, in a period of freezing weather, we managed a count of 1189 - 1326 birds. This year the mild weather meant that numbers attending the feeding stations were much lower and the total at the 6 main feeding stations was only 645 birds. The count at Nant-yr-Arian was due to thick fog rather than a near complete lack of birds! This serves to tell us only one thing, Welsh kites clearly aren't dependent on feeding stations!


Many thanks to all the observers who gave their time to undertake counts. The Welsh population is currently estimated at in excess of 3,000 birds so this winter's count represents only about 20% of the population. In future winters, counts will only be carried out during a period of prolonged cold weather.

Since tagging was re-started in 2002 we have wing-tagged over 2,000 young Red Kites - where the hell have they all gone?! I managed to read 11 birds in two days at Gigrin (including 1 Scottish bird), Mike did better at Bow Street with 14 tags read and John Roberts got two at Llanddeusant. I know there were more to be had but despite the huge effort expended every summer most kites nowadays are un-tagged (I can hear the photographers rejoicing from here!) 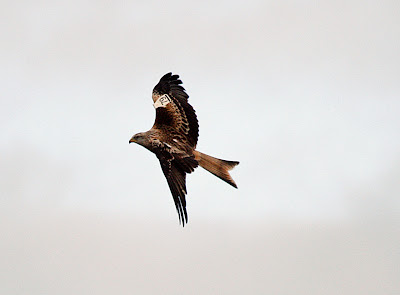 One of the few tagged kites identified at Gigrin. A 2011 chick from just over the road!
Posted by Tony Cross at 21:28 No comments: