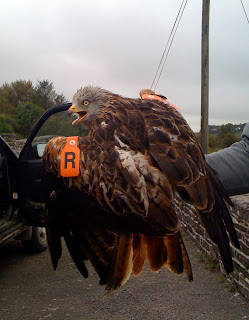 Liz, great news that Orange/Orange R has made it through the big freeze as it isn't from Yorkshire (as its tags would initially suggest) but a real old timer from mid-Wales and is now the oldest recorded BTO ringed Red Kite! The current listed record stands at 20 years 1 month and 15 days but this bird has already exceeded that. Featured in the last issue of Boda Wennol, it was ringed on 19th June 1989 by Peter Davis & myself in a nest near Rhandirmwyn. It was picked up near Tregaron with a minor wing injury in August 2009 and after a short spell in care at our Rehabilitation Centre at Gigrin Farm was released on 27th September 2009 at Pont Einon, Tregaron (with a new set of wing-tags in their original colours). I'm really pleased to hear its still alive and look forward to trying to find where it nests so that we can keep a closer eye on it. The oldest recorded wild Red Kite ever was a German bird at 25 years and 5 months.
Posted by Tony Cross at 22:20