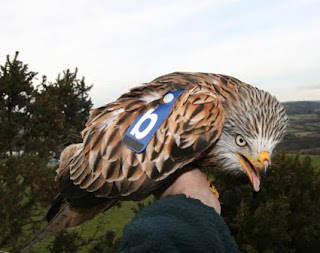 Earlier today I released two rehabilitated kites from the aviaries at Gigrin. The first bird (shown above) was found grounded at Dolybont earlier this month. It was an unringed adult female and was tagged Black/Blue b on release. The other was an adult male hatched in 2001 and found grounded near Devils Bridge on 28th December, that too was tagged (Black/Blue a) on release. Both birds had recovered very quickly but were kept in until the cold spell had subsided. They were both released back near where they were found. It will be interesting to see at which nest-sites they turn up this spring.
Many thanks to the finders of these two birds for reporting them to us so promptly.
Posted by Tony Cross at 21:00